6 Lessons to Learn from the Oroville Dam Disaster

The Oroville dam disaster is a reminder of how important it is to be prepared and to be able to react at a moments notice. 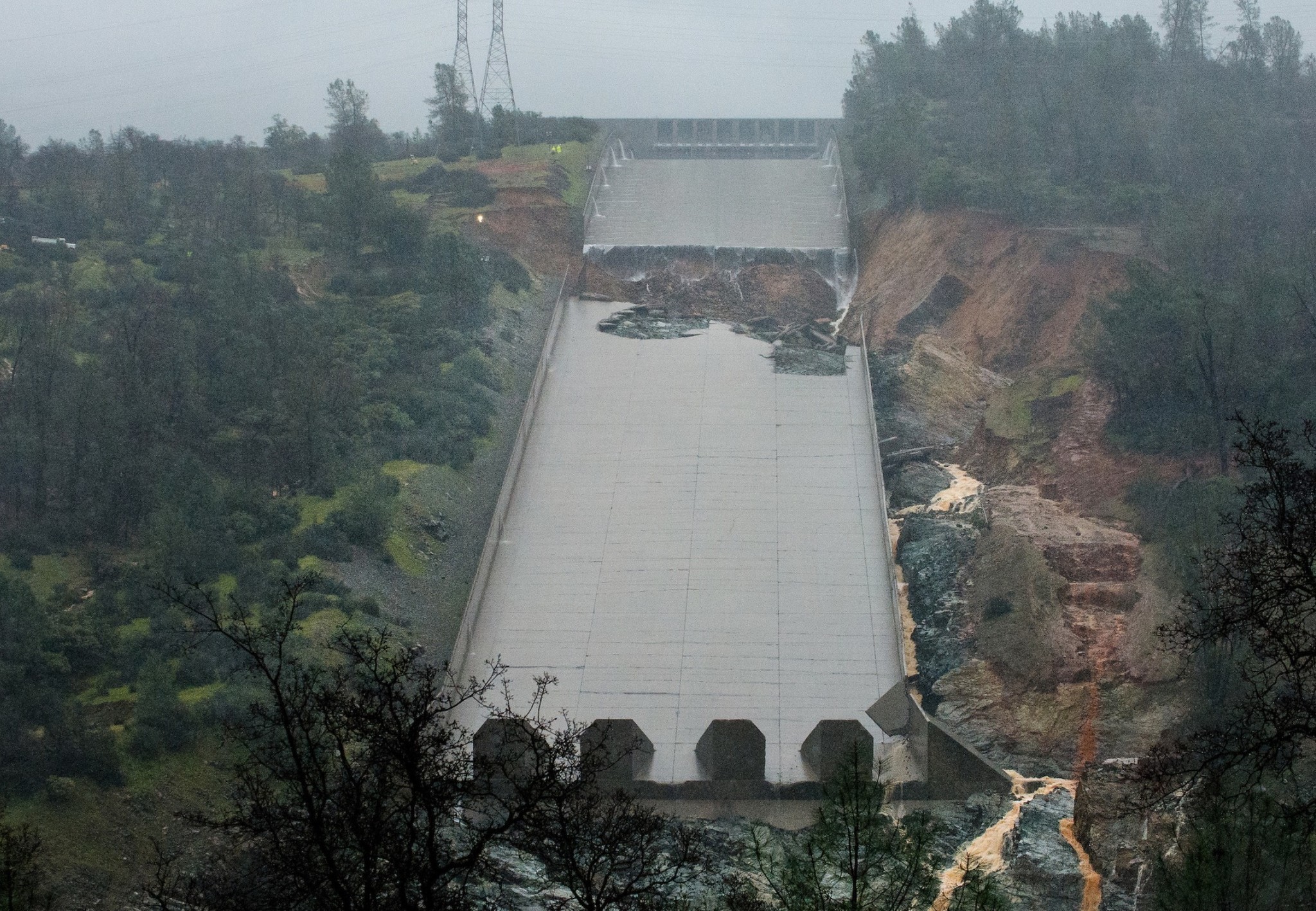 Have you ever pictured what it would be like to be ordered to immediately evacuate your home because of an impending emergency? Imagine only having enough time to grab your pets and your children and head for the hills. While many believe there is adequate advanced notice in evacuations, this isn’t always the case.

As many of you know, due to the higher than normal rain levels in California, water levels at Oroville Dam, the nation’s tallest dam, were so high that an emergency spillway was used for the first time. Initially, dam officials believed the measure worked, but were soon disappointed Sunday afternoon, as more water from record storms flowed into Lake Oroville. This is when officials detected a hole in the emergency spillway. Officials put out an evacuation order Sunday afternoon telling around 200,000 people the emergency spillway at Orville Dam could fail within an hour. With no time to lose, panicked residents quickly left the area scrambling to get out of harms way. As evacuees made the mass exodus, they sat for hours in gridlock hoping to get to their destinations in time.

While the dam break is slightly diminishing and the mandatory evacuation order has been lifted, many residents are thinking twice about going back due to another series of storms that will hit the Oroville area over the weekend and are threatening to dump 10 more inches in water. One resident states, “I don’t want to live in Oroville anymore,” said Shelly Clarke, 52, who fled her home with her husband and slept in her car overnight. “After this, I’m afraid of the dam.” Source

When I wrote The Prepper’s Blueprint: The Step-By-Step Guide To Help You Through Any Disaster, I emphasized that every disaster teaches us another lesson in how to be better prepared and this one is no different. This essential survival guide stresses how important is to have plans and supplies in place in order to be better prepared for the disasters that are on the horizon.

6 Lessons to Learn from the Oroville Dam Disaster

Keep the following in mind the next time you think you don’t need to prepare or evacuate.

1. Evacuations can come at the very last minute and many may not be prepared in time.

The mandatory evacuation order came Sunday afternoon and 200,000 residents were given one hour to leave. Even if you are given short notice to evacuate, it is very difficult to get your belongings in order under the stress of a mandatory evacuation. One Oroville resident recollects how most people barely had time to grab their kids and pets before leaving in all directions. Some fled on foot. Some fled without shoes. Deyan Baker, 19, Anthony Rhoads, 21, and their 2-year-old daughter, Rylee, of Oroville, had no car, so they ran into the street hoping someone would give them a lift. Source

“We were running. No one was stopping,” Baker said. “I started having a panic attack. I felt helpless.”

Preparedness experts suggest having an evacuation bag or bug out bag prepped for items for the entire family. Make sure these are easily accessible and ready to go for emergencies such as this. While a dam break may not be a disaster your area would encounter, what about a gas leak, or a refinery spill? What about a wild-fire? There are many reasons to have evacuation supplies. Here is an evacuation checklist to ensure you have everything covered. As well, consider preparing your evacuation vehicle.

Not only is a mass exodus arduous, but dangerous as well. During evacuations there is always some risk to danger. For instance, many are in a state of panic and do not always make the wisest of choices. One Oroville evacuee brings up the point of just how dangerous the roads are when evacuating.

“Cars were speeding by so fast, some careening on the shoulders to pass the traffic, “you could smell the engines burning,” Rhoads said. “You could smell the burnt oil, burned clutches, tires squealing.” Source

There are those who are in a mental state of its ‘every man for himself’. There are also others who are opportunists and take advantage of the situation and can cause injury as a result. One Oroville evacuee knows this lesson all too well. Cameron Asbury, 33, was packing up the truck with his family’s belongings after receiving the evacuation order Sunday afternoon when an unidentified man hijacked the vehicle, ran him over and sped away. You can read more about that here. The point here is during evacuations, it can be dangerous due to heightened emotions, desperation and opportunists taking advantage of the situation. Make sure that you have a way to protect yourself. While many do not believe in firearms, having one during these times would be advantageous.

3. No one knows when evacuation orders will be lifted.

While the mandatory evac order has been lifted for Oroville, there is still an evacuation order in place and many are not sure when they will come back with the threat of the dam still fresh in their minds. When an evacuation is ordered the residents are left to the mercy of the local government in deciding when it is safe to come back. Having a short-term disaster plan in place before a disaster strikes will relieve some of the stress associated with evacuating. As well, with a solid plan (conceived while you were calm and rational) this will ensure that you won’t skip any important planning steps. Living out a disaster in an emergency shelter is not always the best choice, especially if you have pets or special health care needs. Consider how important having an emergency fund would be in a situation such as this. Having money set aside in advance to pay for hotel stays, food, etc. would prevent you from going into further debt.

Sunday’s evacuations in Oroville came after several days of state officials saying the dam itself was not in danger and that there was no serious threat to nearby communities. Authorities continued to maintain Sunday night that the dam itself was safe. But their assessment of danger to downstream communities from the spillway’s damage changed dramatically Sunday at 4:42 p.m., when DWR issued this tweet: “EMERGENCY EVACUATION: Auxiliary spillway at Oroville Dam predicted to fail within the next hour. Oroville residents evacuate northward.” Source As the mandatory evacuation was ordered, news stories were quickly published about this situation and no one really knew all the facts. Many believed the dam was under the threat of imminent failure, thus causing more panic and heightened emotions.

During any type of emergency breakdown, there is strain on resources due to the demand of the same types of items needed: gas, water, food, for example. This causes a demand that many stores cannot keep up with and a breakdown inevitably follows. There are some stores who will take advantage of this and price gouge. Limited resources does not only occur during the evacuation route, but afterwards where the evacuees locate to. With 200,000 individuals scattered around the Northern California area, local grocery stores could find their supplies quickly exhausted.

6. The state, county and city officials were unprepared.

Although the local and state government are closely monitoring the situation, many state residents have raised questions on why the erosion of the dam wasn’t fixed 5 years ago when state officials were warned. According to one article, “Countless proposals have been floated over the past two decades to fund infrastructure out of the general fund, and prioritize critically needed upgrades to dams, roads and bridges. But Sacramento spends a pittance out of it’s $180 billion budget on infrastructure, and most of that is earmarked for the abysmal roads and a crumbling intrastate highway system.” Simply put, government officials were not prepared for encountering a damaged dam. Due to their negligence in planning and funds, a town’s livelihood is threatened – children are absent from schools, flooding of multiple communities could occur and an even more disastrous situation becomes more catastrophic.

Each time a disaster presents itself, it is important to recognize ways to better prepare so that history does not repeat itself. The Oroville dam disaster is a reminder of how important it is to be prepared and to be able to react at a moment’s notice. While many believe local and state governments have everything planned out, there are slip ups and those mistakes can be disastrous for the residents involved. The six points listed above frequently occur with disasters and it is important to recognize this. If you walk away with anything from this article, understand how important it is to plan accordingly. Emergencies happen at the drop of a hat and if you aren’t ready, if you waste precious time gathering emergency items at the last minute or have to come up with an emergency plan at the last minute, vital details will be left out.

This article was originally published at Ready Nutrition™ on February 16th, 2017