What do you do when you come face to face with someone who does not understand why you prepare? Or when they begin laughing at you for living in a delusional world? Do you give them a good punch in the face or do you sit and talk with them to get them to understand? 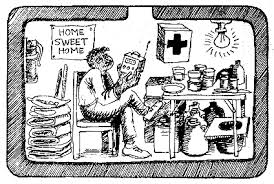 It baffles me that after all the press that Survivalism, Survivalist Lite, Preppers (and whatever name we want call our passion for preparedness) has gotten lately, there are still people out there that scoff and laugh at prepper’s elevated concern for approaching emergencies.  Recently, on a trip I was taking, I told a man about my website and what I write about.  After telling him, I then held my breath awaiting his reaction.  It’s not good.  I got “the look,” and then the guy started making jokes about my heightened sense of paranoia and my lack of faith.

I was laughed at by someone who believed the picture painted by the press.  We all know the picture: We are all involved in a militia with guns in every room. I knew it was re-education time just by the look on the guys face the minute I told him I was a prepper.  He started trying to set me up for jokes and began asking me questions about my political affiliation.  I was then asked if I am a “tea bagger,” and of course, the most popular questions: if I am a member of a militia, and if I think the world is going to end.  Inside I am saying to myself, ” Le sigh, here we go again!”

Many of us will come face to face with people who do not understand why we prepare, and because they are easily led, will only continue to paint preppers in a negative light.  Honestly, I am very open about prepping and look forward to people asking me questions because I know that they are curious.  Each time I am confronted, I use it as an opportunity to change some of the prejudices and stereotypes out there regarding preppers and survivalists.  I believe in freedom through self reliance, I believe in rising from the ashes when an emergency occurs and not relying on the government to take care of me.  And I will continue doing so despite the persisting jokes.

If you are wondering what happened at the end of my conversation with the guy who was laughing at me — I converted him to a prepper and we went out that day to get survival gear for him and year supply of food.  Just kidding.  But I do think I planted a seed.  I could see that I sparked a chord in him, just by his body language he was taking in what I was trying to convey.  Planting the seed is all I try and do, the rest is up to them.

This article was originally published at Ready Nutrition™ on August 18th, 2010